As usual lah kan bila ada orang sambut birthday kat rumah ni, we started off with the cards and hugs and kisses aje.

(He’s already got his birthday present which is a Kindle also. Now we both can read in bed side by side together gether, hahahahaha…) 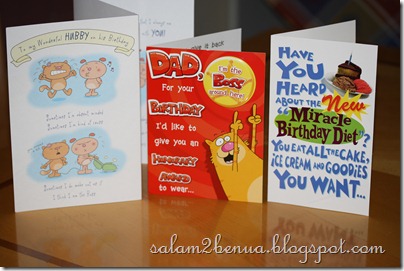 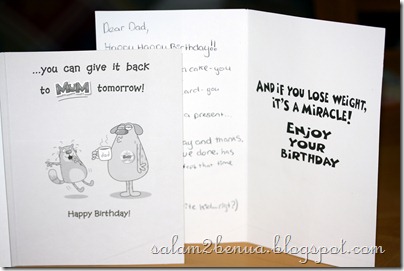 And even though it was his birthday, he still had to do his weekend chore which is doing the dishes pagi2 tadi.

(If I could masak on my birthday, then he could basuh pinggan on his kan 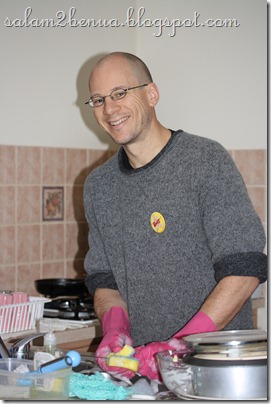 He wore the badge the whole day today, hahahaha…

We were supposed to go out for dinner this weekend but I couldn’t be bothered to book the restaurant. Malas giler nak pergi city on Friday or Saturday nite. We hate keluar malam2 kat city area tu.

Since I promised him chicken kiev for dinner, that’s what I made tonite. 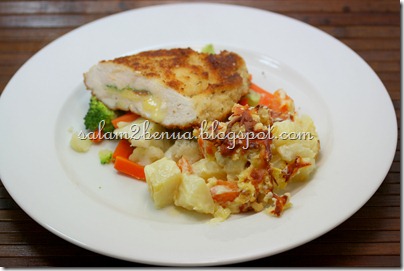 I made chicken kiev (with only basil, semi dried tomato and colby cheese as the filling). Makan dengan leek, potato and sweet potato gratin and steamed vegetables. 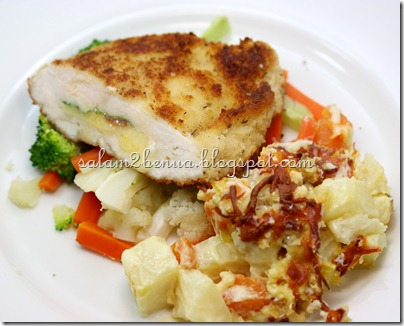 The gratin tu I buat sempoi aje. First I sauteed finely sliced leek in olive oil until wilted. Then add the diced potato and sweet potato and sautee them some more until half cooked. Add a bit of powdered chicken stock to flavour it.

Transfer the mixture to a gratin dish ( I pakai pyrex nya dish aje) and pour white sauce onto it until covered. Tabur bread crumb and a bit of mozzarella cheese on top and bake it at 160°C until the potatoes are cooked and the top is brown. 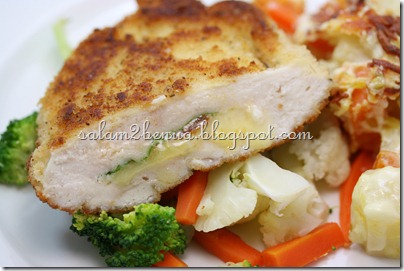 And then for his cake, I made key lime pie but since kat sini takde key lime, I ganti dgn limau purut, hehehe. But the juice I just guna bottled lime juice aje. 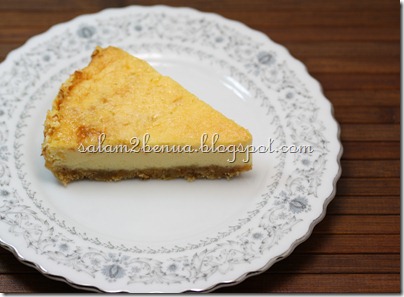 It tasted a bit like cheesecake but without the use of any cream cheese. 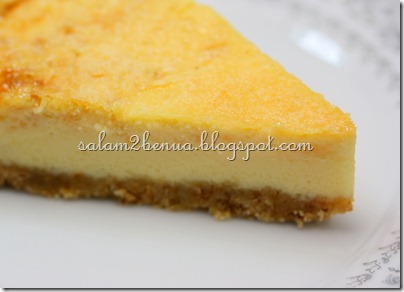 The birthday boy liked it

(I told you hubby I ni half Mat Saleh, half Melayu, heeeee….) 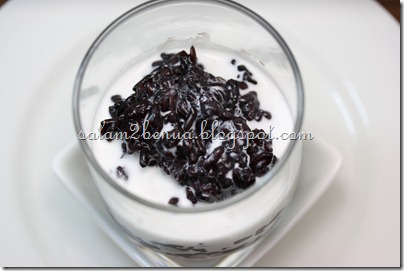 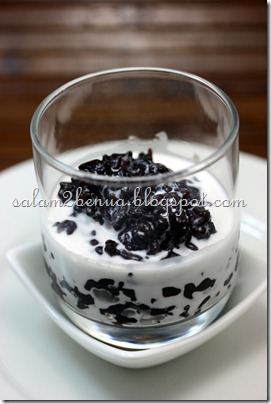 He said thank you for all the birthday wishes

Penned and thought by lemongrass at 20:07
Labels: the other half n me

sampaikan salam selamat ulangtahun kelahiran untuk ur other half. =)

Happy birthday to the good boy. He deserved all the good wishes & food.

I really2 envy u for having such a happy, loving family.Not many as lucky as you.

Happy birthday Mister (i dono what to call him =P)! he seems to have lost lots of weight!
and LOL at the birthday cards! XD

salam, my wishes to the birthday boy. sedapnya makan2 tu..

happy birthday to your other half yek..

i doa both of u kekal bahagia, ceria, sihat & success selamanya...

Scarlett,
we are very grateful to Allah for what we have. But every family ada ups and downs cuma I tak cerita lah kat blog ni :-)

Danial,
Thanks for the wish. He has lost around 25kg so far which is a lot lah kan :-).

AlongRoz,
Salam. Thanks for the wish. Hubby I tu not that manly to pakai pink outside the house, hahaha.

Ibundo,
Salam. thank you for the wish :-)

Happy birthday to ur hubby...wisk him all the best and may both of u live happily ever after. hmmm....tetiba lak terasa nak makan pulut hitam tu....