Semalam tengah dok belek2 catalogues yang ada sales berlambak2 sempena Mother’s Day and I asked The Little Misses what are they going to buy for me for Mother’s Day. Miss 10 said she wanted to buy a necklace (yang costume jewellery aje ye Puan Puan, bukannya yang bling bling berkarat2 tu :-)), but then she said that Daddy told her that Mummy doesn’t wear jewelleries much so there’s no point buying it for me. In a way, that’s true sebab I ni memang bukan jenis yang pakai jewelleries beria, I cuma pakai necklace and 3 rings aje on my body. But I like to collect necklaces especially if they are cute and cheap, hehehe.

1 year ‘supply’ of cleaning lady/person to come to our house weekly to do the household chores that I  detest. (especially the dusting, cleaning the bathrooms and toilets, mopping, vacuuming, making the house spic n span :-))

Why one year, why not forever? Kalau I mintak 1 year, then for next year’s Mother’s Day, I can ask for the same thing again and they don’t have to worry about what to get for me for Mother’s Day present, hehehehehe…… And if I do it every year, every one will be happy, betul tak!

But when I told The Other Half that, he just said, “Ok but you have to do the googling, calling them up, getting quotes!”. Lerr, my present but I have to do all the work! I’ve found a service which charges $57/2 hours and then $20 for the next hour which looks really good. But I’m not sure if that’s a good rate or not. The Other Half said it sounded reasonable. But when you think about it, that sounds like a lot of money for 1 year! Paling murah pun that’ll be $3100 a year! Am I willing to spend that much money to get my house clean for 2 hours/week??? That’s a lot of money to be given away :-). Hmmm….. I’d rather clean the house myself and use the money to pamper myself kan, lagi worthwhile I think, hehehehe….. What do you think? 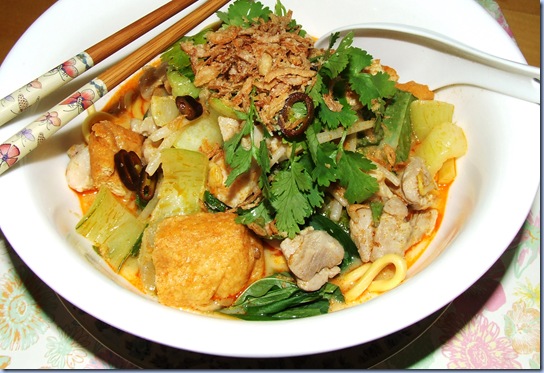 This was our dinner last nite, The Other Half mengidam nak makan laksa :-). 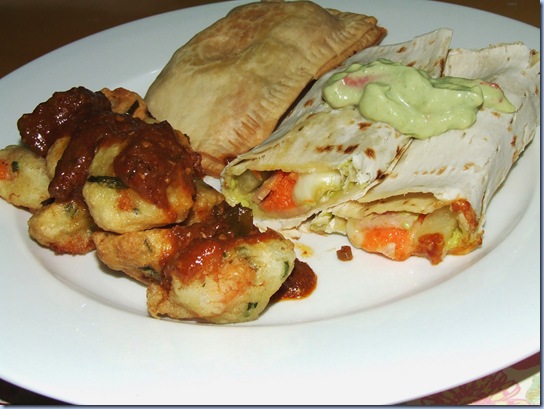 Penned and thought by lemongrass at 20:44

Wuih .... hopefully you get what you wish for.

lili,
I yg tak sanggup nak spend that much money on cleaning lady. For me, that's a lot of money weh for not much hours :-)

LG...
2-3 hari ni Norma tak berapa sihat...MasyaAllah rumah mcm tongkang pecah... And I wonder why men or..my man specifically doesn't have the instinct to do around the house??? Haiyaaa!! Must wait for me jugak ke??
That looks like Sarawak Curry Laksa...am I right?

you do the chores, make sure you get paid cam maid tu dpt...hahaha
x bazirkan....

Kak Ain,
Memang betul, I pun fussy as in I want them to do it my way,hehehe. Baik I buat sendiri n then pamper myself afterwards kan ;-). My hubby mmng suka laksa/mee kari, kiranya that's the only mee yg dia suka makan lah.