I know it’s only been the 2nd Saturday of his promise but so far so good :-). Even though I had to be the one going to the shops to buy all the ingredients for tonite’s meal, I wasn’t complaining, hehehehe… And the dapur pun tak berkecah after he’s been in there which was even better :-). Less job for me to do kan! But yang paling best nya, he was so impressesd with his creation that he just can’t wait to cook again next Saturday, which makes me so so so happy, hahahahahaha!

Since I ni baik hati and wouldn’t want you readers to tertunggu tunggu to see his creation, let me present to you The Other Half’s cooking creation…. Slow cooked ‘tantrum’ chicken ( Gee, I wonder why he chose that name! ). See, I told you guys, he can cook but he’s been so lazy for the past few years to enter the kitchen until I had to throw a tantrum to get him going again! Men!!!! Can’t live without them, can’t live with them, hehehehe ;-). What he did was stuffed the whole chicken with pine nut and spinach stuffing and then put the chicken along with kumara/sweet potatoes and potatoes into the slow cooker and set it on high and 4 1/2 hours later, everything was succulently cooked. He did say he was going to cook easy dishes and something that you can leave in the cooker to cook while you go out is pretty easy I guess. But he did cook the stuffing on the stovetop so he did cook jugak lah kan, hehehehe. 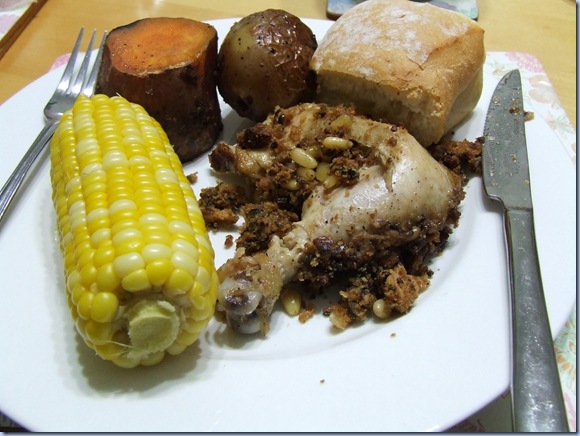 This is my plate :-). The polka dot jagung was so juicy and so sweet, pastu the kumara pun so sweet when it’s slow cooked, hehehe… ( puji jangan tak puji :-) ).

Penned and thought by lemongrass at 20:03

ayam looks so succulent.. rempah apa he pakai? and the tie silicon, i tak pernah nampak , first time kat ur blog and your cooking.. as for my ayam , memang terkankang seksi bila i roast it ...hehehehehehhe

would like to add you to my blog. how do i invite you,,
azieda

Azieda,
I mmng tak pernah guna that silicon tie, malas betul nak ikat, sbb tu klu I buat roast, mmng terkangkang seksi aje, hehehe...
He used breadcrumb, garlic, onion n soy sauce, tu yg nmpk mcm crumbly spices aje :-)
I was just going to ask you about your blog because it was 'shut'. You can invite me by emailing me the invitation to me email addres"s: lemongrass@y7mail.com

adie,
tu yg I kena puji lebih2 sbb to make sure he continues cooking every week,hehehe

hahaha terkezut nampak the first pic, skali pandang macam 'head of a goat' or something. Dont look like a chook at all hahaha. Anyways, Matt kan a machiavelli disciple, hence the taste justifies the look. tell Matt nasi kandaq is on me when he's here in dec... eh when ahh the kenduri?

Noor,
my hubby pun tak tau sgt nak shopping for groceries ni so tu yg I'd rather do it myself :-). Sambil2 tu boleh window shopping, hehehe

Hi, I had it shut for a personal reason. However I still write cuz i enjoy jotting down what seems fancy to me.
azieda