As soon as Miss 5 and Miss 10 got in the car this afternoon when I picked them up, they straight away told me that Miss 5 didn’t get to eat her lunch today. When I asked Miss 5 why, she said in a really sad voice, “A boy kicked my lunch box and tipped out all my pasta before I even got to eat more than 1 bite and he didn’t even say sorry to me!” Sedih betul dengar dia cakap tu. Pastu bila I asked her to tell me what happened from the start, dia pun bercerita lah dengan sedih nya and Miss 10 was also filling in the gaps.

From what I could gather, Miss 5 was sitting alone during lunch time because she couldn’t find her friends to sit with and she couldn’t find her sister to sit with either. So, masa dia tengah duduk bersila atas lantai ( yes, all the kids sit on the floor masa lunch and recess to eat their food sebab kat skolah ni takde meja and kerusi mcm canteen kat M’sia) and starting to eat her lunch, a few boys were mucking around near her kicking a ball when they knew very well they were not supposed to do that when other kids are still eating their lunches. And one of the boys got too close to Miss 5 and kicked her lunch box and tipped out all her pasta onto the ground. And what do you think the boy did? Straight away ran away without saying sorry! And Miss 5 ni yang selalu nya ceria and full of smiles at school terus burst out crying because she was still so hungry and all her lunch are gone!

But yang I geram sangat2 and heran sangat2, why didn’t the teacher asked the boy who kicked it to apologise to Miss 5? Kalau I jadi cikgu, I akan suruh budak tu apologise to Miss 5 infront of the other kids so he’s being held responsible for his action. I know accidents happen and I accept that but yang I tak accept tu, the kids didn’t even say sorry. Ye lah kan, bila lah budak2 nakal tu nak belajar erti accountability kalau the teachers pun tak kisah sangat about this sort of things. If you make a mistake, you have to learn to  admit it and say sorry for it kan! But memang lah some of the boys at that school are so obnoxious and rude and I rasa nak lempang2 aje! Geram geram!!!

Yang Miss 5 sedih sangat2 sebab no one said sorry to her and dia kelaparan sangat2 tadi masa lunch. Miss 10 pulak nya had already finished her lunch so tak boleh nak share anything with her sister. Nasib baik lah I ada bekal muesli bars in the car so dapat lah Miss 5 lapik perut sikit before sampai rumah tadi. Sampai aje kat rumah tadi, after dah mandi manda, terus dia makan a big bowl of cereal with sliced bananas on top :-). Kelaparan weh, hehehehe. Bila I told The Other Half what happened, dia pun sedih aje dengar anak dia kelaparan, hehehe. Kalau it happened to Miss 10, rasanya dia tak kisah sangat sbb she’s not into food, but this is Miss 5 we are talking about who just loves her food so much, hahahaha…….

And speaking of food, our dinner tonite cuma pan-fried crumbed lamb with coleslaw and chips. 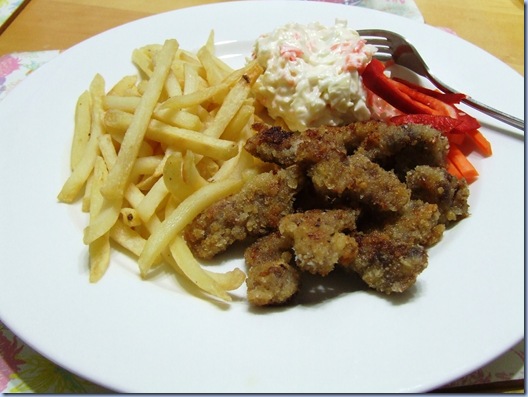 Penned and thought by lemongrass at 20:07

Nora,
tu yg I heran, why can't they call me kan to say what happened. Maybe sbb it wasn't her class teachers yg were there at lunch, ntah lah. Some of the teachers at that school ok, some memang lah, mcm tak boleh nak fikir pulak nya!

at school tak ada cafe ke? it makes me wonder kenapa cikgu dia tak offer anything to her? Kesian nyaaa..