The Other Half said to me, “It’s been 3 weeks already. I should get a medal!” Do you know what he was talking about? His promise to cook every Saturday nite :-). He was supposed to cook last nite but since semalam no one felt like eating much after a big picnic lunch, he postponed it to tonite. I said to him, “ we’ll wait till you’ve passed the 6-month mark, then I’ll give you a medal for cooking! ” I dah bertahun2 masak, tak pun mintak medal, dia baru 3 kali masak dah mintak medal, hehehehe……

And furthermore, he had to ask Miss 10 to help him to cook tonite so tak aci lah kan kalau bagi medal kat dia sorang :-). But truthfully, Miss 10 loves helping her Daddy in the kitchen because he made her do a lot of things like chopping the veges, tasting all the ingredients, weighing and measuring the ingredients, stirring the food in the pot which is fun to do kan. And it teaches her maths and science at the same time but in a much more fun way! Hehehehe…. Unlike me yang jarang ajak dia masuk kitchen to cook dinner sebab I would rather masak cepat2 without any interruption :-). But once in a blue moon we do have our weekend mummy-daughters baking sessions which they both enjoy. Hmmm, dah lama jugak tak buat our baking sessions ni….

So for dinner tonite, The Other Half and Miss 10 cooked beef tacos. 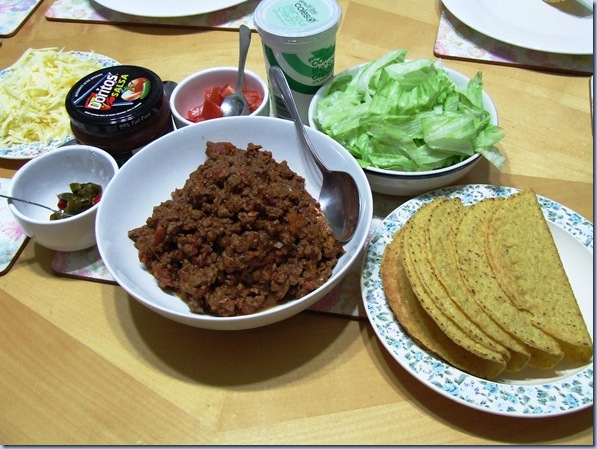 The whole taco ensemble before the assembly. 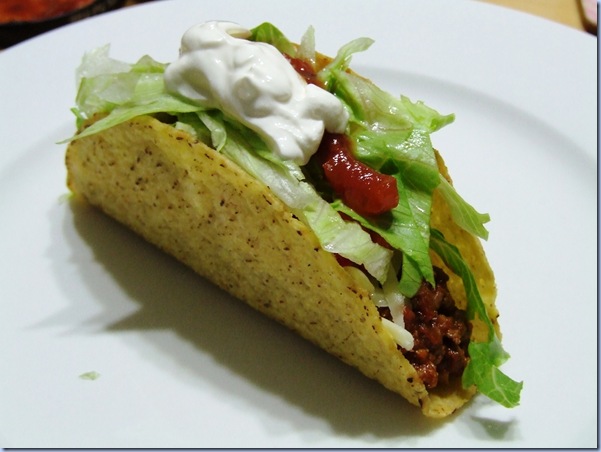 After the cosntruction, doesn’t it look tempting?

I wonder what he’ll make next. Oh yeah, I forgot, the Honorables will be here next weekend so he might cook roast I guess. But after next week, he’s open to suggestions for his dinner menu from my loyal blog readers as long as it’s nothing too complicated but still taste good ( banyak benor demands dia, hahahaha ).

Penned and thought by lemongrass at 20:04