The Other Half is so keen to buy me an iPad for my birthday next month.

He said that he knows I will love it.

It’s just because he bought an iPad a few months back at the same time when we bought the new oven and stove top and the fridge and freezer.

Dia kata since we were going to go broke from buying all those whitegoods, might as well go even ‘broke-er’ by buying him an iPad.

And sejak tu, hari2 he tells me how good his iPad is!

And boleh katakan most nights he will use his iPad in bed to watch a sitcom or a movie and also uses it as an eBook.

But I keep on telling him that I don’t really want it and neither do I need it.

I said to him I would rather that he buys me a good light for my food photo taking session and also make me a good light tent so I can start taking good photos again or buy me another lens for the camera.

I cakap dengan dia since dia dah terer sangat2 buat trellis sendiri sekarang ni, he might be terer jugak to make me a light tent.

As long as dia tak buat the light tent as bagak as the trellis dah lah kan, hahahahaha

The Other Half terus rasa tak excited dah sebab I mintak benda lain for my birthday present….

I definitely need a light tent and a photo light more than I need an iPad!

Sebab sejak my old light tent and my good lights ‘passed away’, I have been using just a single light bulb and the most basic prop to take my food photos and I do not like the outcome.

Like tonite for example, I masak balti lamb curry for dinner. 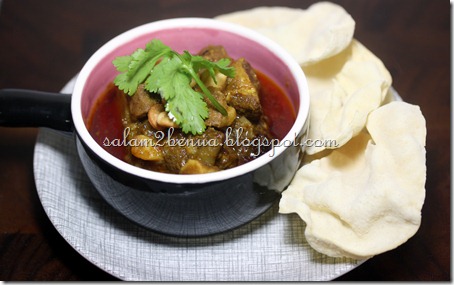 I kena pindah2kan the light bulb to get a nice exposure of the dark curry. Itu pun still nampak yang the curry is still too dark while the poppadum dah terover exposed. 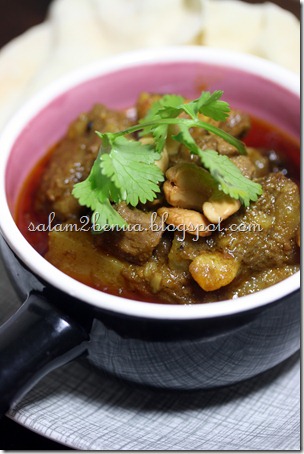 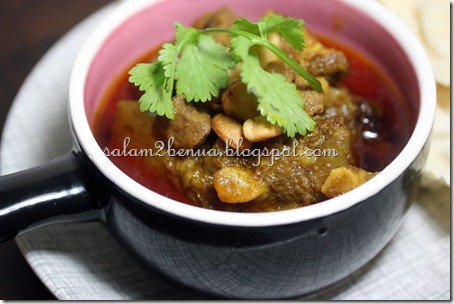 But seperti kata The Other Half selepas dia translate kan peribahasa kegemaran dia, “If you can’t dance, don’t blame it on the lopsided dance floor.”

Penned and thought by lemongrass at 19:44

Salam & hi,
Are all men alike? My hubster pun macam tu last year he bought me the iPad2 when my wishlist was either food mixer or a nice tote. This year he suprised me with the new version iPad, uwaa i nak buat hapa. Dah beli terima je lah when hati meronta-ronta nak food mixer. I hanya ada hand mixer jer..sob sob sob..

Zard,
Salam. I think they think they know their wives' tastes better than we know our tastes kot, tu yang they buy us things very far removed to the ones we idam2kan, hehehe.
I know I will like the iPad but I dont think it's a necessary for the time being. I would rather have the lights :-D.

yang sebenarnya them all yg nak benda tuh... hehehhe... and not the stuffs yg them wives nak... hehehhehe

awww... your hub is so sweet, I'd go for IPad..
I have one and can't leave without one hehehe... bigger screen, so tak payah lah I squint sampai juling.
The best thing is I could reply to all comments while lazying around in bed, minus point~I need to find out is how to write my posts using IPad :(...
About the light tent, I've come across few.... I'll email you the link if you wish (err... you email pls)

Yaz,
Bila I mintak lights, dia suruh I pergi surf sendiri and cari sendiri but he'll get it for me he said, hehehe...

Lisa,
He's not sweet, just practical, hahaha.
I know I will like the iPad once I've got it but I can't see the need of having one at the time being :-).
I've surfed a few sites as well for lights and light boxes but so far nothing that I like that is within the budget.
But I would love the links from you. My email is lemongrass@y7mail.com. Thanks :-)