It was -2°C at Perth Airport at 6 o’clock this morning when The Other half left for work riding his bike.

What was his isteri mithali doing?

Still under the doona where it was really warm and comfy, hehehe…

And when we went to school this morning at 8, it was still 3°C…

I nearly had frostbites on my nose and ears and fingers when I was hanging the laundry out on the lines at 7.30 pagi tadi.

We moved to Perth sebab the weather was supposed to be Mediterranean where it was always mild and beautiful, hehehehe….

But the sun did shine during the day bringing the temperature back up to gorgeous 17°C in the afternoon.

I am typing this entry with the heater switched on facing me, my fingerless gloves on, a scarf around my neck and multiple layers of clothing.

(I love Winter but I tak tahan sejuk, hehehe).

But the girls obviously tak rasa sejuk kot because Miss 8 and Miss 13 were only in their pyjamas and socks.

But we all kat rumah tak suka makan soup (except chicken soup) so the next best thing is hot mashed potatoes with plenty of gravy, hehehe. 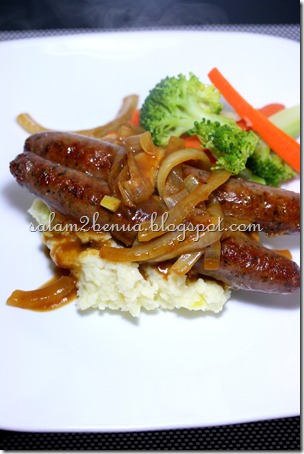 I made mashed potatoes with sauteed leeks and mustard. Eaten with sausages and onion gravy. Then nak balance the creaminess, we had steamed broccoli and carrot sticks as side. 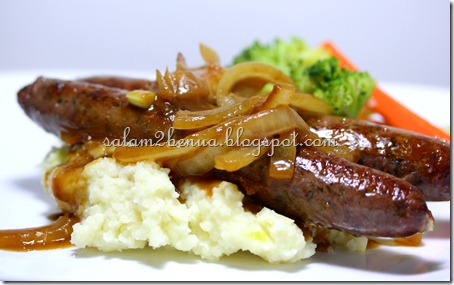 Penned and thought by lemongrass at 21:43

i lovee the cold... when i was in nova scotia, it was -47 degrees one time.. while we were celebrating merdeka day... heheh...

I was saying to hubby just a few days ago that we should go and visit the family next month., with a horrid look in his face he said "no way!! Its winter, it'll be freezing cold" duhh! dah terget-used to the weather di malaya nampaknya.. Hahahahahah...