Back to the normal routine

Our guests have left for Msia early this morning.

And The Other Half and I are both extremely tired sebab dah berjaga since 3.45 along with them.

The Other Half took them to the airport sebab I don’t like driving by myself at that early hour and they were predicting heavy rain pagi tadi pun tu yang lagi lah malas nak drive, hehehe.

And then since dah berjaga pagi2 buta, The Other Half pun left very early for work lah which was good sebab he came back early this afternoon, yeay

And I pun sejak pagi tadi was so busy with cleaning and tidying the house and buat a few loads of laundry.

The house is starting to look like its old self again after 10 days of it being filled with people.

And I can finally lepak2 depan computer blogwalking and surfing the net, hehehe….

But kesian kat my guests sebab I didn’t have enough time to cook and bake delicious food for them.

Tiap2 malam, I only made the simplest dinners that I could conjure in less than an hour.

We only ate out a few times aje for lunch.

And bila dah keluar sehari suntuk, memang susah lah nak masak something yang takes a long time to cook (unless I masak the night before and just simpan dalam fridge which I couldn’t be bothered doing bila dah penat.).

Takpelah, next time diaorang datang lagi, I might plan way ahead and freeze all the dinners so I don’t have to worry about cooking, hehehe…

And tonite, I made something simple for dinner sebab dah penat and mengantuk nak masak complicated dinner.

We had sausages with chips and salad. 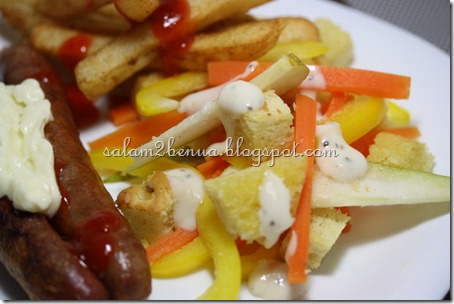 I made pear, steamed carrot and yellow capsicum salad with croutons to go with the sausages. 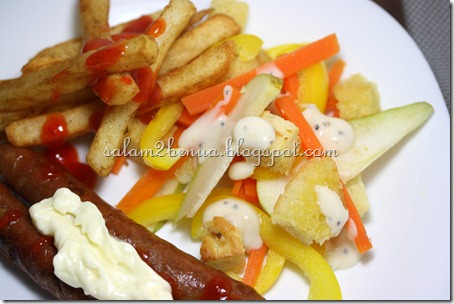 The combination is very nice because the sweet pear compliments the carrots and the raw capsicum.

Esok I nak try persimmon pulak in the salad, sure lagi sedap kan!

P/S I will try to answer all your comments in the next few days once the house chores have all been done ye!

Penned and thought by lemongrass at 19:44

so sad…my heart just breaks whn my mom and sis left last nite, just like you, they've been with me for the last 10 days. sometimes i wish i wasnt living too far away :(

Greetingsfrom england,
It is sad when they leave to go back to their home and us knowing that our home is so far away from theirs.
I pun slalu wish that I could find a way to have my family close by...