Glued to the ad breaks

I’m not a tv watcher.

Memang tv tu jarang sangat we all switch on during the day.

News pun we all jarang tengok, maybe once a week aje kot. We only read the news online aje.

The girls will normally watch tv in the morning while they are having breakfast before going to school and then watch another half an hour or an hour of tv when they are having afternoon snack after coming back from school.

And then the tv will be off until the next morning.

Unless ada shows like RBT or Border Security or Border Patrol or cricket.

But for the past week, the tv has been on non stop dari the time the girls balik sekolah until around 9 o’clock macam tu.

And only on Channel 9 sahaja.

But we are not really watching any of the shows during that time.

We are just waiting for the ad breaks….

Sitting readily infront of the tv with our iPhone video cam on every single ad break!

kalau I tengah busy kat kitchen preparing dinner, I will kerah either of the girl to take my place to wait in front of the tv for the ad breaks.

Kalau The Other Half dah balik kerja pulak, he will take turns with me pulak.

A few school choirs were invited to sing and record some Christmas songs at their studio.

And these recordings will be played every night on tv from a week ago until Christmas.

But no one knows at what times will these recordings be played each night, setiap hari they’ll change the time.

And they only recorded a 15-second and a 30-second versions of the christmas song so if we blink, we’ll miss it basically.

So far, what we’ve deduced, they only play 2 songs each night from different schools.

And so far, we’ve seen probably either 8 or 10 schools singing their Christmas carols.

Miss 9 said that a teacher from another school has seen their school on tv last weekend and has told their music teacher about it.

But at that time, I haven’t been doing this tv vigil so tu yang termissed because we didn’t know they were going to start playing christmas songs that early.

I said to The Other Half that her school’s turn is bound to come up sooner or later again so we just have to patiently wait aje lah…..

So, anyone in Perth, if you happen to be watching Channel 9 from around 6 o’clock to 9 o’clock and love watching the ad breaks, do watch out for Miss 9’s school choir ye.

And Miss 9 is right infront so it’s easy to see her (that’s what the teacher told me, hehehe).

Tu sebab my dinner for the past few days have been dinners that are easy to make or that can be made way in advance or that can be cooked in the oven so I can spend time sitting in front of the tv, hahaha.

Tonite’s dinner was roast chicken with gravy with parmesan and mixed herbs bread and sempoi salad. 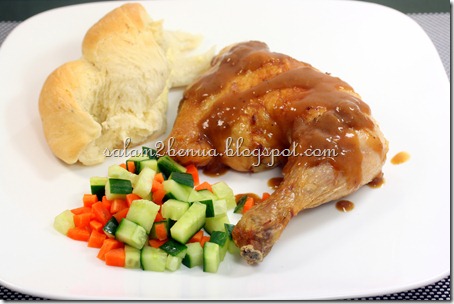 the roast chicken tinggal sprinkle a few spices on it and masuk dalam oven.

The temperature got up to 38C today so memang cuaca yang sangat best untuk buat bread. 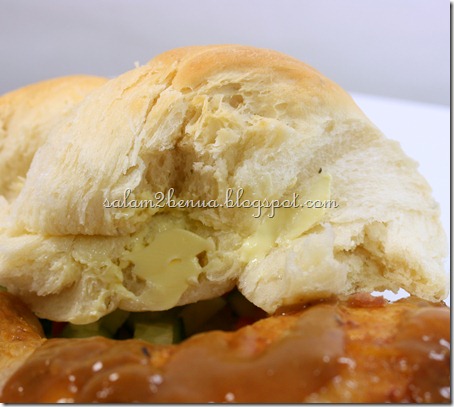 The only thing I need to cook on the stove top was the gravy but it only took a few minutes. 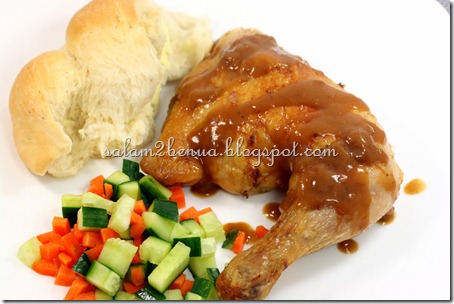 It was a good dinner to be eaten on a hot night while waiting for the ad breaks to come on, hehehehehe….

Penned and thought by lemongrass at 21:38