I will be going back to Malaysia all by myself esok for 10 days. The Other Half and The Little Misses will be left behind to fend for themselves…

Selalunya it’s The Other Half yang pergi outstation terbang ke mana2 tinggalkan we all ber tiga kat rumah for a few days.

Kali ni, it will be me yang tinggalkan diaorang so it feels a bit strange.

I will be going back sebab Abah I will be undergoing a major heart surgery this Friday, insyaAllah. And I want to be there when that happens and also during post-op care.

Sepanjang I kat sini everytime dia sakit masuk hospital, I was never there to lawat dia or to look after him. Luckily I have siblings and in laws who help my Mak to take care of him in his time of need.

This time, I want to be there sebab it’s a major surgery and I can accompany Mak I to look after him during the day when everyone is at work. So, maybe I akan berkampung lah kat IJN tu.

(Luckily lah kan around IJN tu penuh dengan food courts so every break time, bolehlah I sample all the foods sepuas2 nya ikut selera I instead of terpaksa ikut selera The Little Misses or selera The Other Half, hahahaha…)

Lagipun it’s school holidays sekarang ni and Christmas and New Year holidays for The Other Half so dia takde lectures or consulting jobs so he can look after the girls. And The Other Half wants me to go back to be with Abah.

So, the whole day today I’ve been quite busy. The house is dusted and vacuumed and mopped, the toilets and bathrooms scrubbed and cleaned, the outside area is swept, the washings done and folded.

(In 10 days time when I get back, I just hope the house will still be in a clean condition, hehehe.)

The dinner menu for the 10 nights pun I dah written down for them, heeee. The Other Half kata lagi senang dia nak masak dinner this way sebab he doesn’t have to perah otak fikir what to cook every night.

But what I do know is that a lot of the dinners will have chips/ fries in it, hehehe.

(I just hope they remember to eat vegetables though because I didn’t put that down on the menu list.)

He said, “as long as everyone is fed and no one dies of starvation, that’s good enough!”

Semalam pulak I did the shopping to stock up the freezer for easy convenient food like sausage rolls and meat pies and cheesy puffs. Tak lah anyone kebulur for lunch kan

(But if you ask The Other Half, he would say itu ciri2 orang yg obsessive yang tak percaya laki dia boleh jaga anak2, heeee

It will be a bit sad sebab I won’t be here untuk our wedding anniversary on Thursday and on Christmas Day.

And malam ni I masak pasta pulak. Even though they will be having mac n cheese while I am away, I still masak pasta tonite (sebab I yang nak makan

I made beef goulash makan dengan fettucine and bread. I loosely followed this recipe. I added sliced carrots, used fresh diced tomatoes and added a bit of sugar and omitted the wine. I was supposed to add cream at the end but I completely forgot. Rasa dia still sedap though 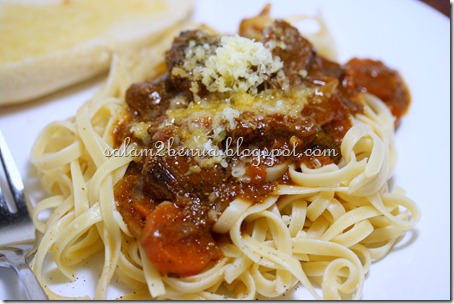 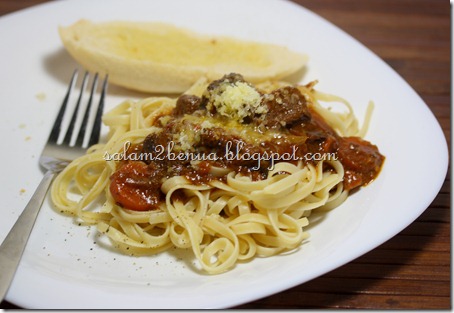 I definitely will not be eating pasta or any western food (apart from KFC, hehehe) kat Msia nanti!

P/S Can Kak Kasih, Kak Zai, Nora (from the Top 10 members widget), JieJ and Cheq Sue email your addresses to me at lemongrass@y7mail.com by tomorrow. Ada a small token menanti anda berlima, heeeee…..

Penned and thought by lemongrass at 21:57

salam LG,
my hubs kirim salam kat your dad. Mudah-mudahan semua dipermudahkan..
can you inbox me your no while you are in Malaysia, boleh kitorang melawat your dad kat IJN nanti..

hopefully you abah will be better after the major operation!!

Blu4sky,
InsyaAllah I will sampaikan yr hubby's salam to my Dad. Nanti I will pm you ye :-).

i went through this some months back, if you can recall. i know what it's like.

i'm sure your dad will be very pleased with your presence. here's wishing him well and a successful ops...insyallah

Noir,
thanks. It is very stressful isn't it when you are suddenly the carer to your parent. All this while you always think of them as the 'carer'.

Zarin,
thanks for the doa and InsyaAlalh I will samapikan your salam to them. I will pm you nanti ye :-).

Harap your Abah have a smooth operation and speedy recovery, Insya Allah.

Have a safe journey, and insya allah everything will be better after the surgery :) Take care Abah!

A bit teary eyes reading this post, because it reminded me of my own Abah. Well, not only teary eyes actually.

All the best to your Abah, you and family. And happy Anniversary in advance to you and your partner.

Wishing you a safe journey back home and wishing all the best to your dad. You being there would definitely bring him joy. Reminded me of the time when my mom had her surgery and it was our time to be caring for her, instead of her taking care of us as her kids. It is challenging but it is so worth it! Hope everything goes well, Insya Allah.

have a safe journey back to Malaysia & semoga operation your dad berjalan dengan lancar AMIN :D

Here wishing all the best for ur abah's op and to u.. hv a safe journey.. moga dipermudah kan.. Insyallah

I pun doakan agar Abah u cepat sihat. have a safe journey..

hope u have a safe journey & hope everything goes well with ur dad's surgery.
truly understand the feeling. my dad went for a major heart surgery early last year. we literally camped at the hospital till he was discharged.

My Life My World said...

Wishing your abah 'Get well Soon'... praying for his speedy recovery...