Akhirnya pengunjung bertuah telah memunculkan dirinya setelah satu hari I tunggu2 kemunculan nya, hehehe... ;-). Ingat kan dah terpaksa buat another lucky draw to give the present away tapi dia dah muncul so tak payah lah buat lagi, lega sikit.... Tahniah buat Liasari for being my 10 000th visitor and thank you so much for being a loyal reader of this blog. I really do appreciate it. Tunggu ye I'll be posting the gift soon.
Tonite Miss 9 didn't go to soccer practice sbb esok dia ada exam. Kesian pula kat dia kalau balik2 soccer practice penat2 and tak lalu nak makan when esoknya ada exam. Kat WA ni, there's a statewide exam called WALNA (tahun ni dia tukar nama but for the life of me I can't remember its new name,hehe) but only for year 3, year 5 and year 7 aje. Miss 9 sat for it 2 years ago when she was in year 3 so tahun ni kenalah sit for it again. Yang tergelaknya, the WALNA exams are not compulsory here so kalau sape2 tak nak sit for it, the teachers and the schools won't mind. Pelik jugak kan. Actually since Monday lagi dia dah start exam tu and tomorrow is the last day. Friday pulaknya is a pupil-free day so the little misses don't have school on that day. Agggghhhh, another long weekend...... I love the little misses so much but tonite they really drove me nuts! I had to do homework with both of them and both of them ended up crying! Either I'm a really mean Mum or they are just 'gembeng'/crybabies. Sometimes I really do feel like I'm not fit to be a mum because there's so many situations that I don't know how to handle. :-( :-( Big sigh........ 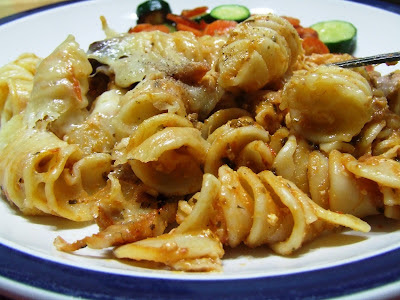 Enough rambling.... back to dinner. We had roast chicken pasta bake tonite. We bought roast chicken last week and freeze the leftovers. Hari ni, I just carik2 daging ayam tu and mix it it with the cooked pasta and also ready made pasta sauce, then sprinked it generously with shredded colby and baked it in the oven. We had it with sauteed carrots n zucchini. The little misses ate everything sampai licin so sedaplah tu kiranya, hehehehe.

Penned and thought by lemongrass at 21:16

Don't worry. You are the best mommy to your little misses. Sometimes it's good to be a mean mom! Supaya jadi orang!