Seperti yang di janjikan, tayangan perdana of step-by step instruction of making pavlova. When people ask me what does pavlova taste like, I really don't know how to describe it apart from that it's sweet (too sweet for some people!) with crispy and brittle outer layer with a very soft fluffy marshmallowy centre. It's basically meringue but in a bigger form and softer in the middle. And very low in fat for anyone who's conscious of their fat intake (but high in sugar!) so still not a healthy dessert especially after you've topped it with whipped cream. But the fresh fruits on top of the pavlova is definitely healthy, hehehehe... :-). 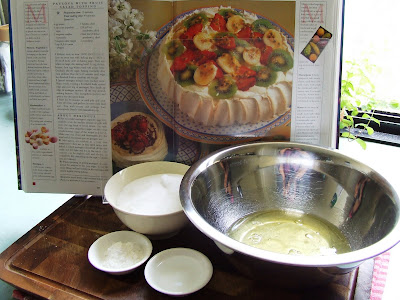 -Then beat the egg whites using electric mixer (Kalau you ada lengan macam Popeye then you can use hand whisk) until soft peaks formed. 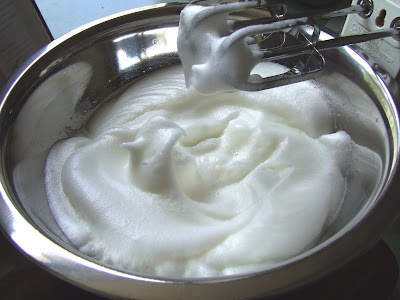 -Then add the caster sugar 1 tablespoon at a time and beat until sugar's dissolved and the mixture looks white and glossy and the egg white mixture has formed firm peaks. 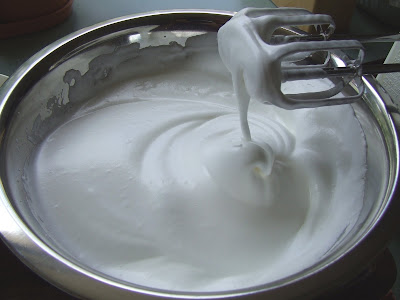 Ini rupa the mixture after half of the sugar's been added to the egg white. 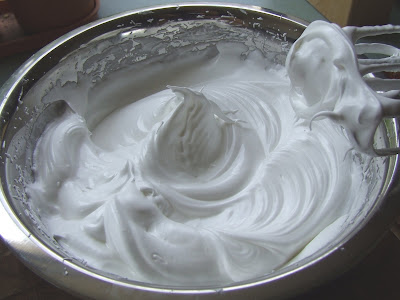 -Then add the corflour and the vinegar to the egg white mixture. 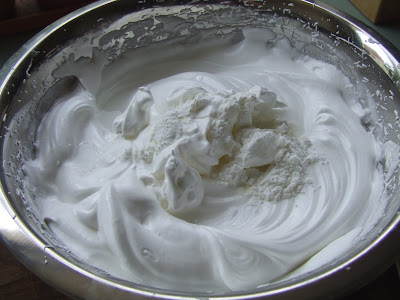 - Then fold the cornflour and the vinegar gently into the mix. 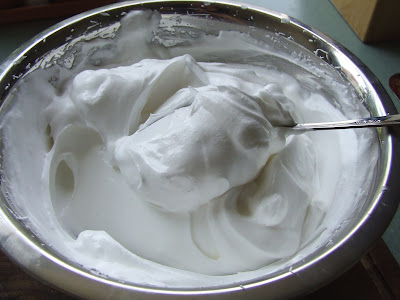 - Then put the mixture on a tray lined with baking paper. Ratakan jadi cantik and gunakan butter knife to make the grooves along the sides.The reason for this is supaya the sides tak pecah2 after baking. 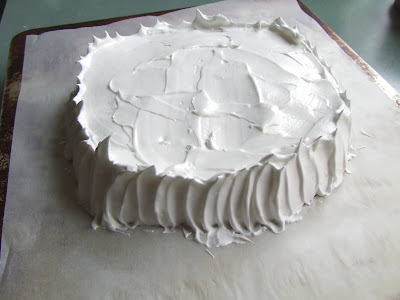 - Then bake it in an 140- 150 C oven. Temperature dia tak boleh tinggi sangat or else the outside will be burnt but the inside tak masak lagi. Bake it for about 50 minutes. Then turn off the oven but leave the pavlova inside the oven with the oven door ajar until the oven is really cool. This helps the outside layer to become crispy and the inside to stay moist. 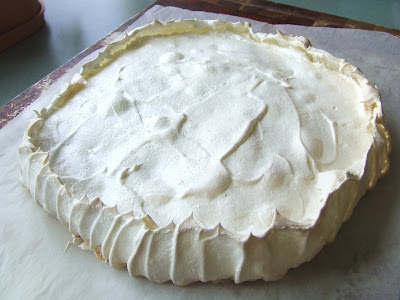 This is how it looks like after dah sejuk.

- Then you can decorate it with whipped cream and whatever soft fruits you like. 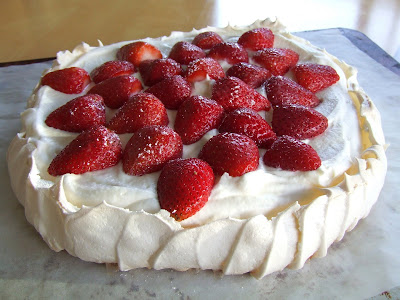 This is what's left of our pavlova after the Little Misses and the other half had a 'bite' of it :-). 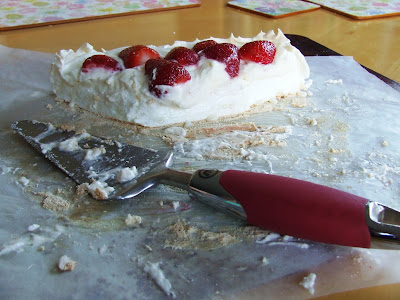 Now, you can hear what the 'food critics' say about the pavlova..... ( Sila abaikan what the other half said at the end of the clip ok! That is so NOT true :-)). Haa....Haa...Haa..... But memang pun the Little Misses had to 'berlakon' under duress. They said to me, "we just want to eat the pavlova Mummy, pleasssseee........." . I wouldn't let them eat the pav until they've said something tu yg macam kena paksa aje, hahahahahaha..... Memang tak boleh jadi actresses like Maya Karin lah the Little Misses ni!

Penned and thought by lemongrass at 21:05
Labels: Recipes, The little misses

You should write a book on cooking lah and the video is so adorable. upah 5 dollars kesian kat pelakon utama tapi they are as pretty as Maya Karin

Dear Salina,
hahahaha, I'll leave the writing to the pro or maybe you can be my phantom writer ;-). They got to eat the pavlova after that so that's upah enough for them, hehehe.....

hye sis!
thanx for posting your version of the recipe. hehe. it seems simpler than the one i found on the net. thanx to you too, my pavlova is baking in the oven now. hope it will turn out well ;D hehehe~ wish me luck!

hye sis LG :)
it turned out to be very nice. eventho xde whipped cream and we only had fruit cocktails as the topping it was very yummy. nk habiskan pun sayang coz i have to wait till next holiday to bake this again ;P

i love it tooo. hehehe